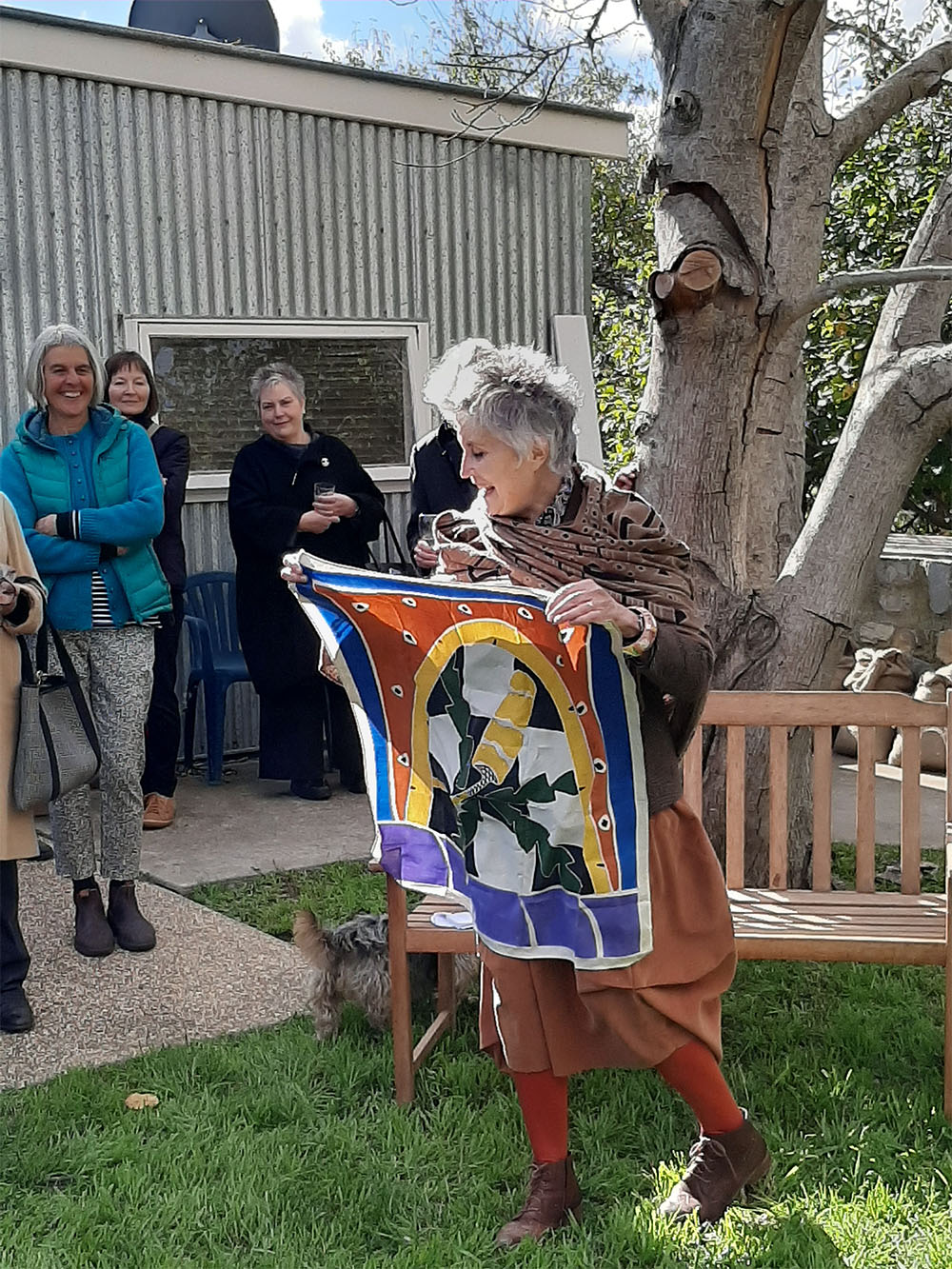 To give you some idea of their striking designs I can unfurl this silk scarf that Patsy Hely and Helen Leitch collaborated on designing and editioning at the time of the Bondi Pavillion mural. Photo by Chris Ward.

Notes for a few words on the occasion of the opening of Patsy Hely’s exhibition at Helen Stephens Gallery at Collector on 11th April 2021.

Thank you for the opportunity to say a few words on this occasion of the opening of Patsy Hely’s exhibition. I would like to acknowledge the traditional owners of this land on which we stand: the Gundungurra and Ngunnawal people.

Patsy Hely is an accomplished artist, an avid reader, even of newspapers, (which I myself find a hard call) keen bushwalker and birder, excellent marmalade maker… Throughout her career, Patsy’s balance of interests in the sociology of the everyday, the natural environment and the art of others have sustained and informed her contributions as a perpetually innovative maker, educator, art administrator, mentor and colleague.

A couple of weeks back when I visited Patsy’s Canberra studio she told me “This show is to try new things”. A scholar of the rich history of ceramic forms, she is currently interested in metaphorical container forms, such as mountains. Painted with images and motifs observed on walks on particular local mountains in Hely’s Canberra locale, each pot depicts one event, one place.

They are the first hand built pieces she has made since the Glebe Estate Workshop days.

The Glebe Estate Workshop was managed by a Trust set up by Bernard Smith from Art History Department at Sydney University. Patsy Hely had a studio there. Like many others, I loved to visit to watch her paint her textile inspired patterns and whimsical portraits in brightly colored underglaze stains on flop molded white earthenware plates. She deftly combined colour, pattern and narrative.

When the corner studio became vacant in 1984, Patsy offered it to me. The conviviality of that shared workshop space was formative for me. Susan Ostling was there too. We successfully applied for a workshop equipment grant and were fortunate to all have part time work at the nearby Tin Sheds, teaching ceramics to architecture and art history students from Sydney Uni.

During that time a tile mural of native plants and marine motifs was designed and painted by Patsy Hely and Helen Leitch for Bondi Pavilion. The tiles were created by curved free form lines cut by the artists through sheets of clay. I recently commented to Patsy that this was an early example of her fractal, organic approach to a compositional grid.

To give you some idea of their striking designs I can unfurl this silk scarf that Patsy Hely and Helen Leitch collaborated on designing and editioning at the time of the mural. I was devastated Patsy she told me that their mural has not been conserved as part of the recent work being done at the Pavilion.

Throughout the 1980s Patsy was an inventive mold maker. Informed by her ideas for decoration, she would pummel and tap lumps of clay into facetted forms from which she cast plaster molds for marvelous slip cast cups, saucers, teapots and jugs with a different pattern on each face. Intrigued by function, utility and shape she adores the quality and refinement of industrial porcelain and the great Ceramic works of the 18th Century from Meissen, St Cloud, Sevres, Bow, Arita, and has travelled to visit iconic factory museums.

In the 1990s, a lively dialogue about studio potters creatively adapting factory design and production techniques was in the air around the country. Patsy accepted a position at Northern Rivers University at Lismore to establish a slip cast ceramic design and production workshop, while at Queensland College of Art Susan Ostling embarked on jigger jolly plate production in collaboration with local chefs and painters…

In Lismore, Hely read eco criticism and created an ethereal series of austere, unglazed translucent porcelain beakers, pinpricked all over with the names of acacias. She and David were building a house in the Kyogle countryside, so landscape and everyday tools of trade entered the lexicon.

When teaching at the National art School in the 1990s, I encountered the inimitable Helen Stephens who, in addition to being a talented writer, theorist and maker of very desirable domestic ware, went on to curate and tour the innovative “being with objects” exhibition of works by Patsy, Susan and me.

From this show, the national Gallery acquired Patsy’s entire collection of evocative mixed media still life groups. The slip cast porcelain pots were given functioning handles, lids and bases from metal, Bakelite, wood and glass, adapted from op shop finds from other eras. Patsy’s Master’s research explored touch and her ideas about tactility and the ways we interact with everyday objects were exquisitely resolved in this body of work.

Tactile investigations continue to be a primary interest. Rather than handles, delicate protrusions stud the surface of her recent porcelain cups so that one becomes mindful of how one’s hand finds a grip. How we handle objects provoked Hely’s thinking for this show. The ‘garden cups’ explore textures of flowers and bark. Found rocks and pebbles from the back yard are cast and transmuted into surface grips.

Paradoxically, the rubble in this domestic microcosm connects with Hely’s fascination with outer space and the geology of meteors. She had an opportunity to study the collection of meteorites in the Geoscience Australia collection during a project initiated by a colleague, the painter Ruth Waller. Struck by their small size and benign appearance she made clay models. Hooks were attached to a series of vases on which the meteors were hung as if in orbit. A conversation over coffee with friend and colleague, ceramic designer extraordinaire, Rod Bamford led him to offer to do a 3d print of one of the examples she had worked with, the Huckitta meteorite. Watch this (outer) space.

I like to use the term ‘rim theory’ to consider the formal rigor of the way that the rim of a pot is a powerful edge, separating void and volume. As we discussed seams and edges, Patsy revealed that her penchant for found objects led her to cast a Chinese style vase using more mold sections then necessary to create extra seams. She says “the edge is like a path, the path is like a seam.” Separating paths generate patches and patterns.

Like Matisse, like the Bloomsbury artists, like the Japanese Oribe potters Hely’s patterns are informed and inspired by textiles. Her Granny was a dressmaker. She treasures a Chinese vase inherited from her Grandmother now traced with glued seams of mended fragments. Patterns on cut fabric become ruptured and realigned by seams. Hely’s surfaces are marked out with random grids of seams and curves: not the right angled modernist grid.

The traditional use of the cylindrical pot to depict a scrolling panorama is not quite the game here. In Hely’s sophisticated engagement with composition, she says that she looks for a horizontal chance and a vertical chance and for edges or corners to shift register.

The deconstructed garments of Japanese designer Junya Wattanabe come to mind. Japanese aesthetics are an abiding force. Hely loves the ‘magnanimous quality’ of Oribe pots, where the pour of the glaze defines the field of the brushed pattern, the ephemeral scenes of Ogata Kenzan, captured under a clear glaze, the formal geometric patterns of Tommimoto’s emamel on porcelain, the eclectic work of 20th century chef, potter Rosanjin and ‘the devil may care’ approach to surface in the pots of Munemaro.

When she relocated to Canberra, Hely embarked on a PhD that began with the Wedgewood Medallion and morphed into an investigation of the site of the first brick works in Sydney that came to occupy the primary clay source for the Eora Aboriginal people. Reflecting on the subsequent building of Bennelong’s house from fired brick, Hely feels that this imposed house seemed to stand for the total colonized place.

She realized that as the clay mapped the changes in a place, collections of birds could match (map) a place and tell you about its terrain, vegetation, population, transformation. For a concentrated period of time during her research, Hely became a bone fide twitcher, listing name, date and place of birds sighted in various favourite haunts between Canberra and the coast.

She remarks that place is complex and wonders how many places are assembled via the objects we hold in our homes, in our houses
Other key Australian influences are the lyrical painting of kangaroos and grass trees on pots by environmentalist Neil Douglas at the Boyd pottery, wildflower paintings of Louisa Atkinson and of course Margaret Preston. There is also the iconic Waratah design by Lulu shorter on a Stoke on Trent (Royal Doulton) teacup, a treasured possession of Miles Franklin that she reserved for her VIP tea party guests (Hely knows the ‘goss’ on that one).

Patsy Hely’s exploration of new ways to expand her repertoire to enable her to create images of a particular quality has led her to study water colour painting and oil painting. In so many ways, the medium can be the messenger. The flowing immediacy of water colour lends itself to fleeting captures of moving images on a television screen in the ‘Virtual Roaming’ works. The historical resonance of oil paint seems appropriate for the representation of ‘Events’ that involve people in real time and space that Covid 19 has bought us to appreciate as remarkable.

Hely’s delicate painting with underglaze stains and on glaze enamels on her seamed white pots imbues them with layered, nuanced qualities that sustain precious moments of perception and awareness into the fragile permanence of the fired clay.

Note: I am indebted to the generosity of Patsy Hely in conversation for insights into her creative process and key influences. ©Toni Warburton April 2021

Links & Downloads
PDF – Notes for a few words on the occasion of the opening of Patsy Hely’s exhibition at Helen Stephens Gallery at Collector on 11th April 2021.
https://www.patsyhely.com/
https://www.helenstephensgallery.com/