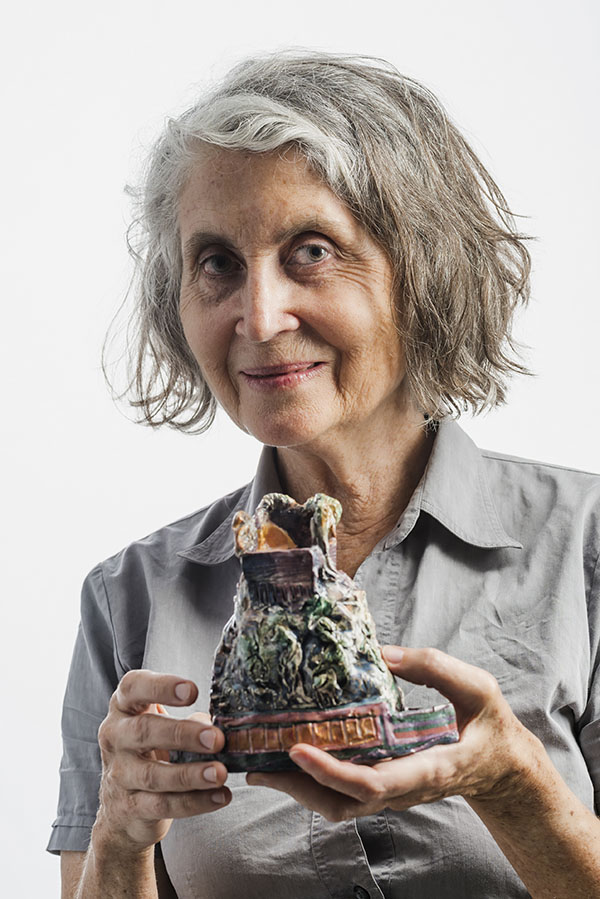 ​Toni Warburton is a visual artist, ceramist, writer and educator who lives and works between Sydney and the South Coast of New South Wales. She is currently relocating her ceramics studio to Sharawadgi Hall at Sutton Forest in the NSW Southern Highlands.

In her work, Warburton engages with a range of media, situations and sites to explore ideas that predominantly engage with place and social relations around how human processes interact with and impact on natural eco systems.

Born in Sydney in 1951, Toni Warburton has a Master of Visual Arts, Sydney College of the Arts, University of Sydney, 2000. Her work is held in National, State and private collections. Since 1982 She has been the recipient of Australia Council grants for studio development and new work and worked as artist in residence at Griffith University in Brisbane, Maharajah Sarejevo University, Vadodora, India as a Commonwealth Fellow, the Australia Council Studio in Tokyo, a National Parks and Wildlife residency at Hill End and the Flicam Centre in Fuping, China.

Her solo exhibitions develop around a core idea that enables riffs and variations to manifest through an immersive and sustained creative process. For example, most recently in 2018 Messages from the Bays explored the artist’s lifelong encounters with Sydney’s Middle Harbour, through a collection of ceramic forms in different genres . The work was installed at Mu Studio Gallery, a heritage listed, refurbished gardeners’ hut within the Sydney Harbour Trust Precinct at George’s Heights in Mosman. The gallery adjoins a coastal bush walking path and its windows look out to the Sydney Heads.

In 2012, Eye of Horus was driven by impulses of retrieval and searching for lost things. Over a week, Warburton ‘excavated’ her means of production from her Marrickville studio and installed them as an incremental accretion at Articulate Project Space in Leichhardt, Sydney. In this instance, her means of production took the form of large working drawings in Indian Ink and gesso on brown paper developed for the sculptures in the Lookout series and a collection of geometric templates made from shellacked cardboard that she had used to generate various container forms in clay.

In 2006 Warburton installed lookout at Mori Gallery, Sydney. Created during residencies at Hill End, these eclectic, painted ceramic mountain forms were informed by the metaphysical symbolism of landscape forms in Chinese, Japanese, Korean and Persian painting traditions. The title critiques the colonial gaze of looking out over a landscape and suggests with a more immersive approach we could learn from indigenous culture to understand country as alive and responsive to human encounter.

In July 2013 Toni Warburton participated in the Fuping Group residency and exhibition at Sturt Gallery Mittagong. She continued to show with these Australian and New Zealand artists whose work made during residencies at Fuping Pottery Village, China is now held in FLICAM Australasian Museum of Ceramics, established there in 2007.

She researched, worked and exhibited collaborative installations with the Williams River Valley Artists Project (WVRAP). in 2016, Warburton contributed AVOID to the group installation While we Sleep for Field work: artist encounters curated by Gary Warner at Sydney College of the Arts Gallery. She developed her participatory Agit Pots H2O meditations on water in blue and white for the collaborative installation that WVRAP artists occupied in Kandos Scout Hall as part of their Instruments of Democracy lock on performances at Cementa 2015 in Kandos. In November 2013 she developed her Agit Pots participatory component for Leave it in the Ground at Articulate Project Space in Sydney. In 2011, her component Riparian vases was included in WRVAP collaborative installation Riparian Rites held at Maitland City Gallery. In 2010 Warburton contributed her installation for WRVAP’s Cry me a River at the Tin Sheds Gallery, Sydney.

In 2009, curator Glen Barkley included Toni Warburton’s ceramics from the Lookout series with her assemblages that referenced original natural fresh water courses around Middle Harbour in Making it New, Contemporary Australian Art at the Museum of Contemporary Art Sydney. Also in 2009, Warburton exhibited with painter and ceramist Peter Cooley in Where We Know at Wollongong City Gallery. Each artist installed a series of works informed by their particular connection with place. For Cooley that was the Blue Mountains area where he bushwalks. And for Warburton that was the littoral zone of the rock platform around Lagoon Head, South Coast NSW.

In 2005, she was a candidate in The Clemenger Contemporary Art Award, Ian Potter Centre, and National Gallery of Victoria. In 2004 her work was acquired by National Gallery of Australia for inclusion by curator Robert Bell in Transformations, the Language of Craft.